If you are a regular here, you know I try to write and post on Torgo Tuesday's.  However this week, Torgo is way slower than usual and we are going to call this a Torgo Thursday.  Doesn't have quite the same ring to it but it's the best I can do this week.

Last weekend, me and nearly the whole Manos Returns cast and crew went to Crypticon Seattle for the World Premiere of Manos Returns.  I cannot speak for anyone else, but it has taken nearly all week to recover.  We had just so much fun, and if I'm going to be traveling as much as I expect to in the future, I had better learn to pace myself better.
Me with director Tonjia Atomic 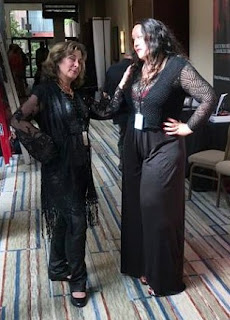 I arrived at the Seattle Doubletree Hotel on Friday May 4th in the afternoon to set up my table and to meet up with others I knew were coming. There was surprise after surprise when people I wasn't expecting arrived as well, like Steven Shields, our Torgo 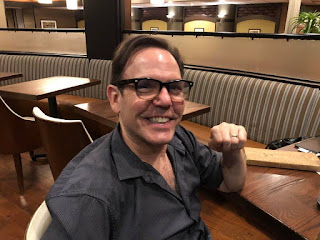 Danielle Daggarty who plays Clara along with Nuria Aguilar who plays Pat
and our Director of Photography, Joe Sherlock 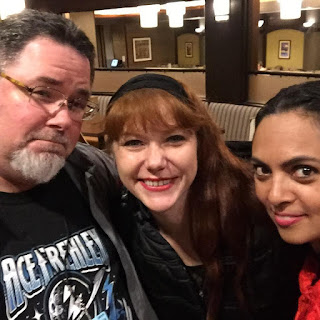 .  Our wives were there too and crew members that traveled from long distances.  Other friends and supporter continued to announce themselves as the afternoon ended and evening came.  I felt there was a perpetual look of surprise on my face and I reminded myself often to live in the moment and absorb all that was happening.   Even Diane Mahree who played Maggie in both the original and this film drove all the way from her home in Colorado. 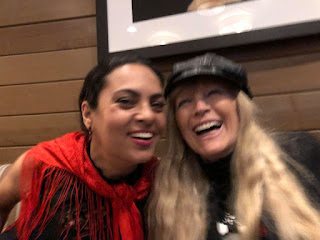 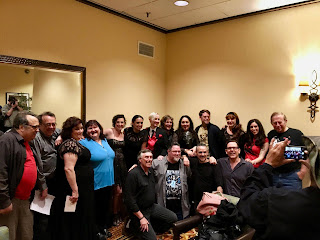 and a nice photo of some of the ladies of Manos Returns
Nuria Aguilar,  Jackey Neyman Jones, Christina Pezzo, Rachel Jackson, Tonjia Atomic 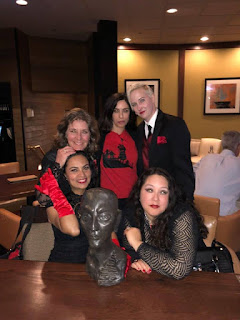 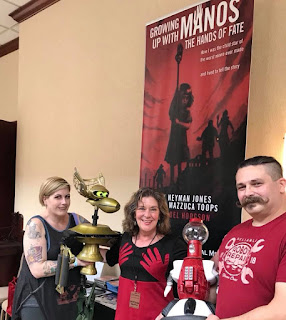 The screening was scheduled for 9 pm that night and when we showed up, there was a large group already waiting.  I was told later that the venue had to bring in about 20 more chairs to accommodate them all.
Here they are 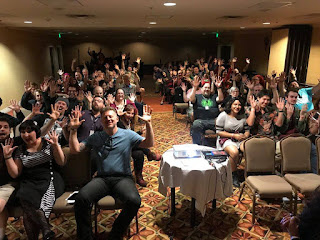 I had been excited about the screening but not at all nervous because I was so proud of the work everyone did to make this film happen.  At that point, I felt satisfied and wasn't dependent on the audience to validate our efforts but I do have to say it was  pretty incredible feeling when we watched it together and I got to experience the first audience firsthand.
They were so wonderful.  They laughed when we hoped they would, clapped and were just so engaged from beginning to end.  I'm sure every audience won't be this loving but I definitely count this as a very good sign.  For the rest of the weekend, they sought us out to let us know how much they enjoyed it.  We cannot wait to share it with everyone.  As of now, we are working on distribution and will announce all over the place when it is available on DVD.   In the meantime, if you know a venue near you where we can screen Manos Returns, please let me know either here or on facebook at Manos Returns.  We would love to bring it to you and all Manos fans.

On Saturday May 26th we have a screening scheduled in Tacoma, Washington at the Grand Cinema at 11:00 pm. Manos Returns at The Grand Cinema We will announce other screenings and news as it is available.

I will be a guest this coming Saturday May 12th in Medford Oregon for a one day event Meadowlark Comic Con If you live near the area, please come visit and check out the other great guests and events for this new show.

Posted by DebbiesManos at 12:06 PM No comments: