Another very long gap between posts.   I sometimes think I’m done writing this blog but then realize there are always things to talk about when it comes to Manos.  Especially these days.  In the last year alone, the Restoration of Manos in Hd Blu-ray, distributed by Synapes was released to the public through Amazon and hit the top thirty best seller list in pre orders the week before it was available.   At the same time, the October 2015 issue of Playboy Magazine featured an article titled The Battle Over The Worst Movie Ever Made.  I had interviewed for it and my name begins the article.  The fun part for me was to be able to say that I was in Playboy.   Marking that off my bucket list at 56 years old.  My boyfriend loved using that as bragging rights.  My twenty one year old son?  Not so much.  Ha!                                                          Playboy Article
I was invited to Crypticon in Seattle last September to attend a screening of a short documentary “Conversations with Jackey Neyman”.  It was a last minute thing so I wasn’t a Special Guest and didn’t have a table or anything.  Little secret?   It was my first Con ever. I have never been to one.   I had the best time walking around anonymously with my Manos t shirt on and talking to people who recognized and commented on it.  Seems I got enough attention that I am invited back for Crypticon 2016 as a Special Guest.  Woo Hoo!  See you there! 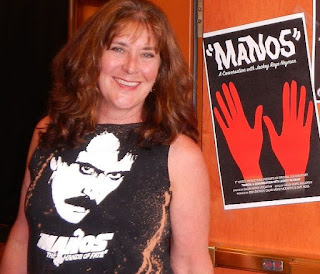 I wrote a book.  Not only that, but I finished it and it is now in the hands (manos) of my publisher, Bear Manor Media. This project could not have possibly happened without my fabulous co-author Laura Mazzuca Toops with her editing skills and gentle prodding.  I just can’t imagine.  Started with a couple years thinking about writing it, then a couple more talking about it and then another length of time to find someone to guide me.  Took sixteen months to research and write, with a ton of sitting around staring into space with a stupid look on my face.  No one was around, so I’m just assuming that’s how it would have looked.  During all that time, I couldn’t seem to write anything else.  Grocery lists were a chore.  I also didn’t pick up another book to read.  So weird.  I love to read.  Now that I’m done writing (for a while, at least) I’m reading two.  Initially, I was going to write a story about my memories and those of my dad, The Master.  One thing led to another and I began uncovering things I had not known and people who I thought had disappeared forever or who were unknown in the first place.  I learned that I’m pretty good at research and that I enjoy it.  Maybe shoulda been a private eye.   This journey  resulted in recovered stories, new friendships begun, old ones renewed and much family healing.
I’ll let you all know the release date as soon as I hear anything.  Expecting it to be within the next few months and then some traveling to promote and meet the fans of Manos.  Check out the awesome cover art by Phil Dragash.  Also take a moment to notice the foreword is written by Joel Hodgson, the creator of MST3K! 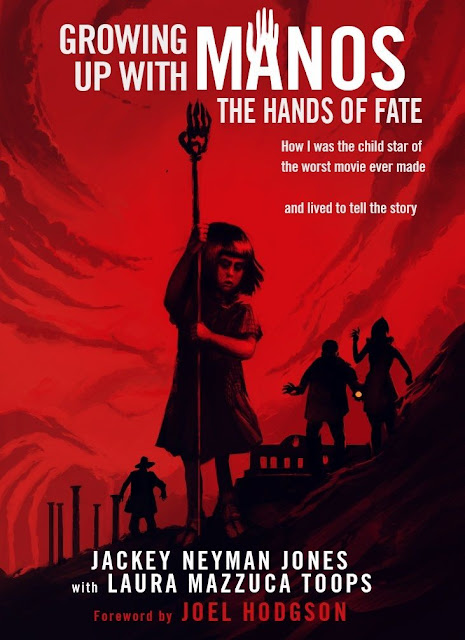 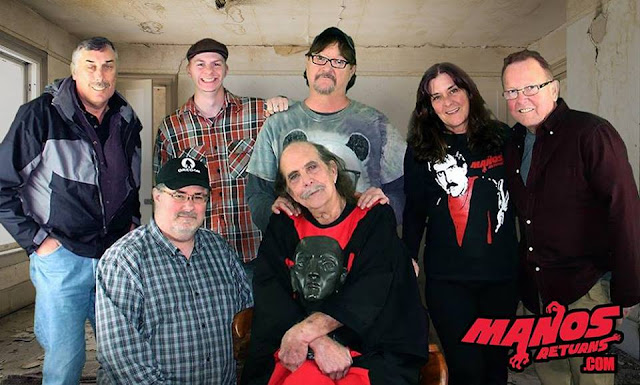 Posted by DebbiesManos at 1:41 PM No comments: