It's not apparent at first glance that my dad Tom Neyman, who played The Master in Manos The Hands of Fate in 1966 was a tremendously talented guy, but he was.  He was a kind of rock star in community theater in El Paso 1965 to 1972 until he left for California and other opportunities.  He played the lead in a number of plays at the Festival Theater now renamed The El Paso Playhouse.  Man of La Mancha, The prime of Miss Jean Brody, One Flew Over the Cuckoo's Nest, Camelot, Arsenic and Old Lace to name only a few.  He was also an artist who worked in any medium he was interested in trying.  In Manos The Hands of Fate, my dad created all the art, props, and some costumes including The Masters robe, the wives gowns and Torgo's outfit.  Some of the sculpture of hands was already created in his body of work and other things he made especially for the film.  The Master and Dog painting and Torgo's staff are two of the props that are most iconic.  I, in turn followed my dad down the art path with the idea that I could do anything and with the same curiosity and interest in doing many different things.  I'm not a girl who shys away from a challenge.  Unfortunately, none of that art is in the possession of our family and so, I decided to recreate some of dad's works as close to the original as I can from photographs and memories of sitting in his studio and studying his method while he worked on an art project or ran his lines for the next play.
In 2012 I produced one version of his painting to use as a Portland Oregon comedy stage production of Manos and to offer as prints
Debbies Manos on Etsy
and then, two weeks ago, I created a second one to use as a prop in our new film Manos Returns and as prints for backer rewards on our Kickstarter crowdfunding.  I knew we would need a Torgo staff for a prop as well and took up the challenge to make it myself.  With my boyfriend's help and welding equipment, we got some 16 gauge steel and got busy.  I loved making them and I love how they turned out.  As close to the original as I can recall and made by me, The Master's daughter. 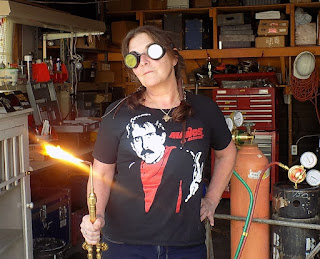 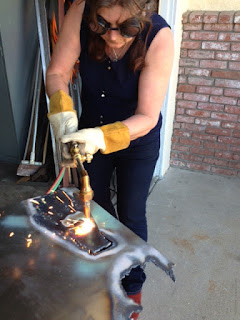 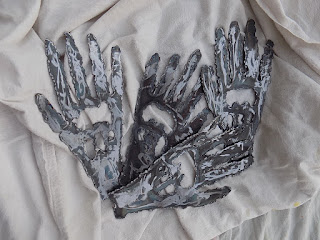 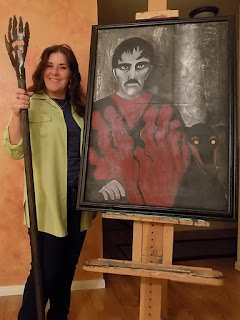 We made 18 total.  15 for Kickstarter backer rewards. One for the film prop.  One for me and one for my boyfriend in appreciation for making it possible to create them.

Our Kickstarter is very near funding with 8 days to go and I'm so proud to be part of this cool project with the opportunity to work with such a talented production team.  Check us out, share and support so we can bring you a quality fun fan film while honoring Manos and the original surviving cast in the spirit of Indie film.  Manos Returns Kickstarter


Debbie from Hands of Felt with Rachel Jackson

"Forgetting You" and Manos soundtrack is being recreated by Cory Fujimori

...and if you read this before 9pm Tuesday Feb 23rd 1016, get us to our goal early to get in on some cool new perks
Manos Returns Challenge

Posted by DebbiesManos at 11:03 AM No comments: