Great Article in my local paper

Just a quick post to share a newspaper article that came out this Wednesday in our local Salem, Oregon newspaper, The Statesman Journal.. Thanks to journalist, Geoff Parks for the great story and thanks to the paper for such a nice big color photo! 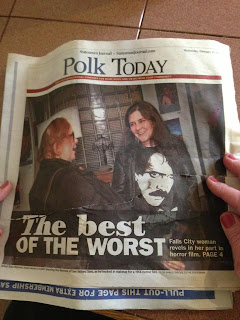 The Best of the Worst

Posted by DebbiesManos at 8:04 AM 7 comments:

This week I interviewed Bryan Jennings, son of William Bryan Jennings who played the part of the Sheriff in Manos: The Hands of Fate.  "Whatever it is you're not doing, go don't do it somewhere else."  I love that line.  I find it really interesting that both Bryan and Diane Mahree (Margaret) who I spoke with last week start off by saying, I don't have many stories or memories and then they go on to give me great stories and gold nuggets of information that no one knows yet.  This is fun.   Guess I'm becoming an investigative journalist, in a manner of speaking.  No offense to the real deal of course.

William Bryan Jennings loved theater and the church choir and was a good singer. I've asked his son Bryan to look for any video of his dad's other performances to share with you.  I do hope we can make that happen.  Bryan talked about his dad's many talents and his way of being.  He said that the character of the Sheriff was totally William Bryan Jennings and his dad probably ad libbed that classic line.  William was someone who was very valuable in working with Hal Warren to get Manos off the ground through his behind the scenes connections and experience.  He was an attorney at the time, sold life insurance as a side business and had worked in the DA's office.  He probably met Hal Warren through the life insurance business and also from their mutual involvement in community theater at the Festival Theater in El Paso.  William knew Judge Coldwell who loaned the use of his ranch back property for the filming of Manos.  He also knew Mike Sullivan who was El Paso Sheriff at the time and who loaned the guns and police car.  As an attorney, he handled the legal aspects of the project and is listed as a producer on the original contracts.

Bryan had been away at college and  was working through the summer of 1966 during the filming so he was not highly aware of what his dad was up to in El Paso at that time but over the years Manos tales would arise at the dinner table and family gatherings from time to time.  One Saturday afternoon in 1993, Bryan checked into a motel room on the Oregon Coast in Bandon and turned on the TV.  Until that time, Manos was no more than a family story that no one had seen since the premire in 1966.  Bryan was away at school and missed the premire so when he turned on the TV, saw the MST guys cracking jokes and then saw he dad step out of a police car to harrass some horny teens, he was stunned.  He said he just sat down and watched in amazement.  At the same time on the same day, my dad, The Master, Tom Neyman was up the coast a couple hour drive away, napping in his easy chair with the television on when he heard a hauntingly familiar tune, opened his eyes to see himself on the screen.  From that moment on, Manos became part of the bigger world and had gone beyond the family tales.

Stick with me while we continue to explore the making of Manos: The Hands of Fate.  Next up.  The convergence of Stirling Silliphant, Route 66, Hal Warren and Manos... and no worries, more on Diane Mahree as well.
Posted by DebbiesManos at 7:15 AM 2 comments:

Diane Mahree was only 19 years old and just passing through Old El Paso when she met Hal in 1966.  She and her best friend were living in Aspen, Colorado, and, being adventurous young women living in adventurous times, they decided to take a road trip to Mexico.  So they loaded up Diane's VW van with clothes, camping gear, her dad's Phillips 66 fuel card, $12.00 dollars and set out.

Somewhere near  El Paso the engine just sort of blew up and they managed to limp into El Paso and to the shelter of Diane's parents home.  After taking the van to a garage, she learned the van needed a new engine, would cost a bundle and take a couple weeks for repair.  Stuck and broke, the girls set out to find jobs in the interim.  Diane's friend landed a job in a bank and Diane stopped in to talk to Fran Simon, the owner of Mannequin Manor Modeling School.  Diane had previously done modeling and hoped to find a couple paying gigs.  Fran had just been approached by Hal Warren who was looking for some girls to play extras in a new film he was doing in El Paso.  Although Diane had no acting experience she thought it sounded like an interesting prospect so made an appointment and went to see Hal.  She met him at his office where he asked her to do some script reading.  He kept her there for several hours reading and reading.  She began to wonder why things were taking so long and why he was spending so much time to decide whether to cast her for a simple part as an extra.  Then came the surprise.  "How would you like the lead?" Hal asked her.  To which she responded, "I've never acting in my life."  "That's OK.  If you do something wrong, I'll tell you."  She then agreed to the "job" which she learned would be shot at night and week ends to accommodate the other actors and crews daytime jobs.

When Hal met Diane, he was scrambling to find a lead actress for the role of Margaret because he had just lost his first choice, a professional actress from Los Angeles.  This other actress had agreed to the part and traveled to El Paso to do the work.  Upon arrival, she quickly discovered she wasn't dealing with experienced movie makers, then had some disagreement and blow up with Hal before leaving in a huff.  She probably also discovered that the pay wasn't exactly guaranteed.  Diane then took the part of Margaret and soon discovered for herself that she would not be getting paid any time soon.  The filming of Manos: The Hands of Fate took about eight days to shoot and at the end, her van was repaired and the girls were ready to move on.  The good news for Diane was that her van ended up costing nothing and she got a new engine under warranty.

Next Diane Mahree story.  How Hal signed her up for the Miss America Pageant in the hopes of promoting his film.
Posted by DebbiesManos at 8:21 AM 12 comments: