Tom Neyman aka The Master

During the 1960's and early 70's, we lived in an adobe house, in El Paso, Texas, with walls over one foot thick that was built in 1887. When my parents bought the house they were told that the builders had placed a coin somewhere in the walls or floor with the year the house was constructed. During one of our endless remodeling projects, a 1887 silver dollar was found in a wall in the back of a closet.  That house is still at the top of a hill on North Cotton Street, tucked up tight at the base of Mount Franklin and just below Scenic Drive where the hapless Micheal, Maggie, Debbie family begin their journey to Valley Lodge.  As a kid, I would spend an afternoon climbing from our back yard and would go all the way up to that road and the pullout where Debbie states "I'm cold".

We lived just three miles from Juarez Mexico and could see the Rio Grande river from our front porch.  The family that lived in the house in the early days were able to watch and hear the battle across the border in March 1911 where the decisive victory of the Mexican Revolution with the capture of Ciudad Juarez occured.  I still remember sitting on that porch imagining that family watching the battle as though it were live theater.

My parents were college educated bohemian types.  Mom was a teacher who became an administrator who became a Psychologist with another degree in Ministry.  My dad, Tom Neyman, who played the part of The Master in "Manos the Hands of Fate" was an artist of many mediums. His work was as Director of the South El Paso Boys Club and the Director of the Festival Community Theater before leaving El Paso, but he was creating every chance he got.  In our back yard was the only big tree in our neighborhood, a patio arbor and a small rock house where he had his art studio.
When he was home, he was either making changes to the house or working in the studio.  When I was around six years old, my mom and I came home from shopping and she went to hang the laundry on the line only to discover my dad had cut down the poles holding the line because he needed more metal for a piece he was working on.

I loved hanging out, poking around his supplies or simply sitting on a stool watching while being bathed in music like the theme song to Zorba The Greek. Dad painted, sculpted, welded and carved. We would sometimes drive out into the desert in an old electricians truck, named Tobacca Roada from the 40's,  searching for things he could include in his work or in the house projects. Weathered wood from a dilapitated shack, railroad ties and nails, or anything that might catch his eye.
One day, as the truck was parked out front, the brake failed and she rolled down the hill and deep into the ditch across the road at the bottom.  Dad attached a chain, hauling it back home, and over time, Tobacca Roada succumbed to the welders torch transforming her into art, including the hand rising from the caldron of fire in Manos: The Hands of Fate.

Dad's most beautiful, expressive work was his hand sculptures in bronzed clay, metal and wood.  Although his painting was saturated with layer of meaning, his hand sculpture came from the deepest part of his soul.  I am now blessed to have one of his sculptures that I cherish.  It sits on my dresser where I can be reminded of his talent and our connection through art.

I remember him making the hands in Manos. I watched while he painted The Master's painting and I recall him figuring out and building Torgo's leg braces. I remember the sketches he did for the Masters robe and the laying out and cutting of the fabric. My mother was a very gifted seamstress and gladly worked with him to design and construct the robe. Those were happy times in my childhood  I am so blessed that some of the best memories of my youth are immortalized through the famously bad Manos, The Hands of Fate.
As I often say, "If you can't be the best, make the most of being part of the worst"

Posted by DebbiesManos at 10:13 AM No comments:

Debbie Makes a Living...but not the way you know it.


So.  How does a self employed creative person make a living?  Although I have, for all my life collaborated with other creative people, I can not say how their financial revenue stream manifests, because I don't know.  Of couse, as children, I would assume they were supported by their parents... but how DO artistic humans coalesce the world of practical reality with the place where dreams are made?

I was taught by my parents that if I could think of it, I should at least give it a try. They constantly demonstrated through expressing their own creative ideas in a number of directions.  They primarily made their livings as a teacher and a Boys Club director, but all the "not working at a paying job time" was devoted to charity work of addressing poverty, the womens movement, community theater, art and home renovation.  Things were contantly in motion in our lives and I understand myself more clearly through the lens of that perspective.  I am who I am because of it.

Here are some of, but not all the ways I live my joy, make a living and spend my time.

I teach painting classes and my mission statement is, we are "Kindergardners with Cocktails"  The only rules are, "Don't mix up your drink with your paint water"  and "you must be like a kindergardner and can't put yourself down"  Just play and be in the moment. 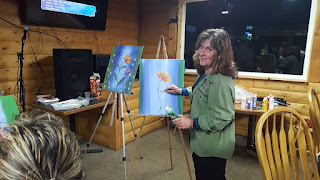 I had a long career doing custom painting and faux finishes and still do a few jobs for old clients that don't want to let me go.  Cool with me.  Pays some bills and keeps me in better shape. 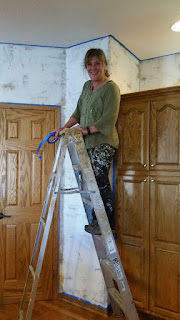 My own art make me happy.  The more I reveal of myself through my art, the more we can relate to one another. 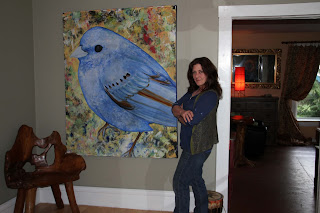 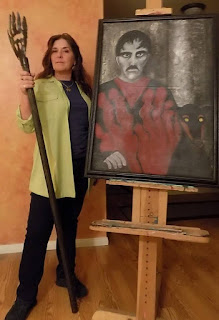 Making movies with friends.
Beyond The Wall of Fear 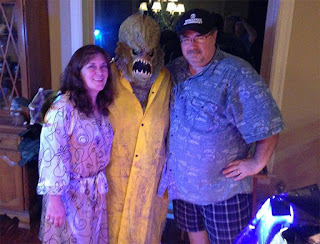 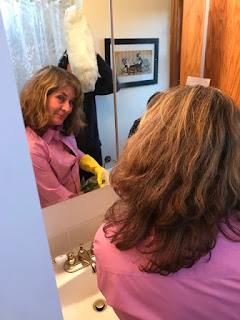 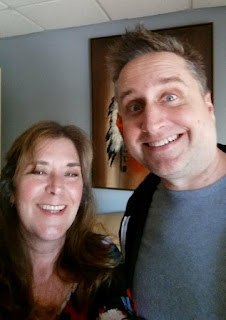 My own new podcast
Jackey's Hand of Horror Podcast 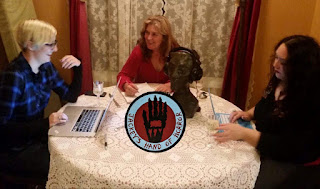 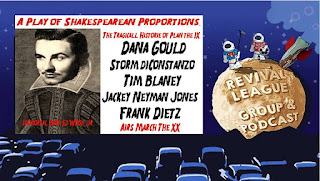 A small acting role and a location coordinator 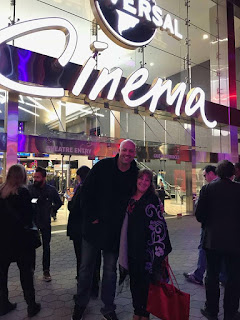 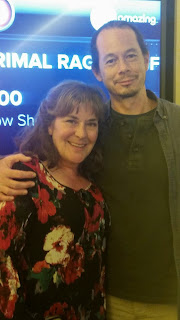 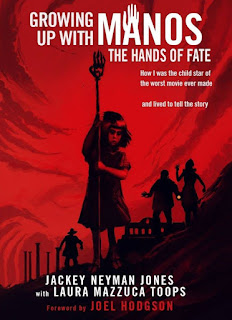 Manos Returns our sequel film to Manos The Hands of Fate has it's world premiere at Crypticon Seattle on Friday night May 4 at 9 pm.  Can't wait to share it.

This is a busy year with Manos Returns coming out and being a guest at a number of events.  Hope you can come meet me at one, and keep watching...lots more on the horizon.


Posted by DebbiesManos at 7:27 AM No comments:

Hey Debbies Manos fans.  I'd like to introduce you to one of my new projects.   With great support from the team at the Mystery Science Theater Revival League, I have launched my own podcast.  Jackey's Hand of Horror is on soundcloud and will release a new episode every two weeks on Thursday. 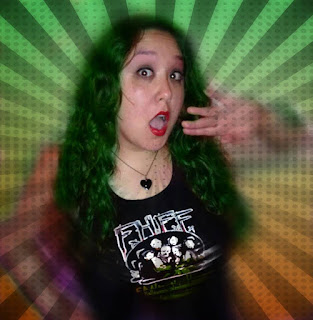 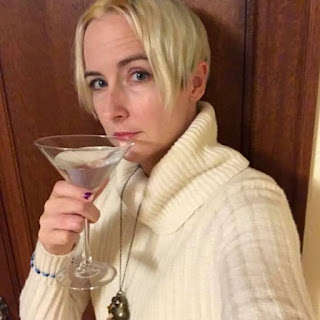 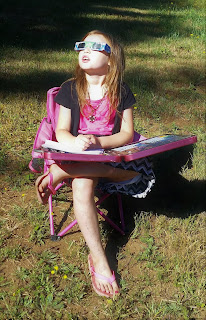 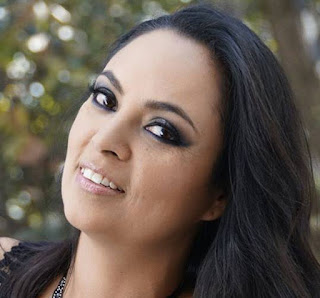 Joe Sherlock, filmmaker and director of photography for Manos Returns 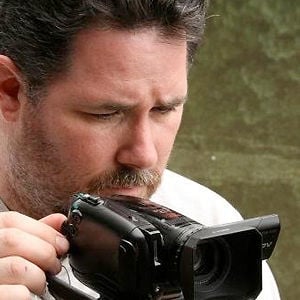 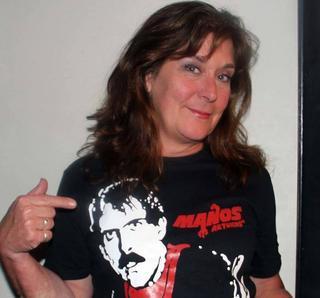 Each episode has five sections represented by the fingers on a hand and will focus on a topic.

The thumb is for our movie trailer reviews where we review and judge two films based on the trailer for that film.  Some of the films are older while some are independent  and others my be new block busters. We will always give links or suggestions on how you might view the entire film on our Jackey's Hand of Horror facebook page.   https://www.facebook.com/handofhorror/

The forefinger is for ideas.  It's our Do It Yourself tutorials on everything from the tastiest tarantula recipes to the best way to photograph Bigfoot in the wild.

The middle finger is our interview with interesting and knowledgeable people within our topic for the week.  So far we have had the honor to interview

Mike Senna, a builder of BB8, R2D2, Wally and other amazing puppeted robots for the  Puppet Episode 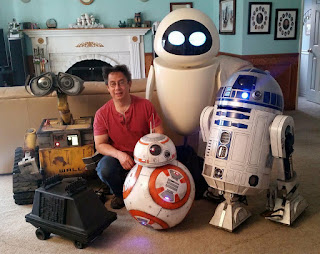 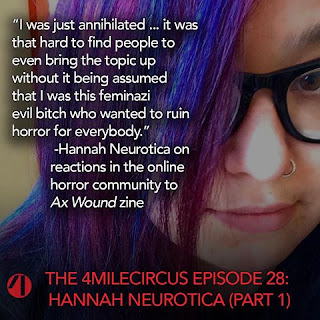 and most recently, I spoke with Pat Magee creator of the new bigfoot film, Primal Rage, on the       Bigfoot Episode 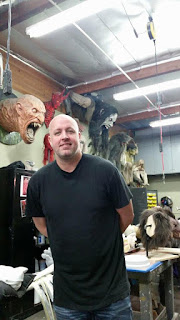 Ring finger is for things we love so much we would collect it's hair and keep it under our pillow or bury it in the yard and keep it forever or maybe stalk it on the internet.  Ya know...that kind of love.

and the little pinky finger is represented by a childs viewpoint.  Young Miss Araidia has got some opinions and is always a delight to chat with.

We are a work in progress and aside from all the challenges for me to go in this new direction and the learning curve, I am happy with where we are going.  None of it could be possible without the encouragement and support from Greg Tally and the MST3k Revival League.  Thanks especially to Natalie Ryan and Ron McAdams for thier ongoing tech support.   Give us a listen and hope you stick around as we learn and grow.


Posted by DebbiesManos at 4:08 PM No comments: