Today, I would like to pay tribute to a man without who’s drive, determination and ingenuity, Manos, The Hands of Fate could not exist.  Harold P. Warren.  Writer, Director, Producer and Star.  Today is the anniversary of his death on December 26th, 1985 and I would like to say a few words to honor him.
Hal Warren came up with the idea for Manos on a bet with screenwriter Stirling Silliphant (who had worked on the show Route 66).  Hal said anybody could make a movie.  Even he could make a movie…and so he did.  He raised about $19,000.00, mostly by selling stock in the film.  At that time, Hal was working as manager of the American Founder's Life Insurance Co. in and was active in local civic groups and community theater.  Through his connections he was able to secure many of the things and necessary people he needed for little to no money.  The Festival Theater, now known as The El Paso Playhouse was where Hal met my father, Tom Neyman who was a regular actor and director.  That was where he also met John Reynolds/Torgo and William Bryan Jennings/Sheriff.  Hal had a knack for recruiting people with a variety of talents.  Mr. Jennings was an attorney in his day job and had worked for the D.A’s office.  I am only speculating here but I imagine that was the connection to Judge Coldwell who supplied the film locations of the house and the Master and wives resting place.  Besides playing the part of the Sheriff with the classic line, “Whatever it is you’re not doing, go do it somewhere else”, Mr. Jennings is credited with being President of Sun City Films and the lawyer for Manos.  Bob Guidry was a cameraman for a local television news station and Bernie Rosenblum was a local photographer.  I understand that Bob, Hal and Bernie’s six hour Manos editing session happened one evening at that television station using the stations equipment.  My father, Tom Neyman was/is a very talented artist and my mother was a talented seamstress, so my father agreed to not only be The Master, but to clothe him, create his environment and decorate it with artwork.   My dad also supplied the kid, the demon dog and the family car.  Diane Mahree fell into the picture when she responded to a classified ad for an acting job.  Although, at that time, she had no acting experience, she needed a job.  She tells a story of arriving for the audition and then kept there for many hours reading lines.  She was going for a part as a wife and could not understand why he needed her to do so much reading until he finally announced that she was the lead actress.  After Manos, Diane left and launched a very successful modeling career in and .  The wives were students at the in .   During filming, Hal was heard to yell at them to stop walking the runway.  The wives costumes originally did not have the red strip of cloth underneath, but the lead wife and the owner of the modeling school were not comfortable with the revealing nature of the dresses and insisted on something more conservative.  So, based on time and budget the piece of red cloth was added.  At the premire, Hal had found a red carpet for his cast and crew to walk upon into the Capri Theater and borrowed spot lights from a car dealer to place in front of the theater scanning the sky to create a feel.  He rented a single limo to circle the block picking up cast members and delivering them to the red carpet.  He even added the detail of autograph seekers in the form of young street boys with paper and pencils.  To be sure.  Harold P. Warren was a visionary and it would be great to hear what he thinks now of his baby.  I’m sure he would be thrilled with the Love of Manos that has built up since MST3000 brought it back to life in 1993.  So, thank you Hal for your contribution to this world and I hope you have many blessings in the next.

Blessings to you all in the upcoming New Year of 2013.  Thank you for reading.  Thank you for your Manos fandom.  “Hands down”  Manos fan are some of the best people I’ve met and I appreciate you all so very much.

Posted by DebbiesManos at 8:48 AM 8 comments:

An old article was recently brought back to my attention.  I believe this was my first interview about Manos, The Hands of Fate.  It was titled “Growing up, Manos”, published in Mimosa Magazine August 2003 and written by Manos Historian Richard Brandt.   From the time of the initial airing of  MST3000 in 1993 until I discovered that Manos actually had a historian in 2003, the film was, to me, still just something I had done with my family as a kid.  I joked about it to my friends but no one actually wanted to watch it, even after I discovered it in the Cult Movie section at Block Buster Video.  The few friends who insisted I watch it with them never made it more than 20 minutes into the film and the few other’s who borrowed my copies, rarely returned them. You know who you are.  As soon as I got my first home computer and learned about the internet, I began searching for anything Manos.  During one of my forays, I found an article by Richard in the May 1996 Mimosa Magazine titled “The Hand that Time Forgot”. I was intrigued by the idea that other people wanted to talk about Manos too so I contacted him.  Today, I’d like to share the story “Growing up Manos” and update or clarify a couple things in the story.  http://jophan.org/mimosa/m30/brandt.htm
First of all.  Yes Hal was a fertilizer salesman later on but at the time of  Manos, he was a respected insurance salesman.  I do however, understand how a Texas fertilizer salesman making the worst movie ever does have certain ring to it.  Up dated info on the voices is that Diane did not do the women voices.  Hal Warren, Tom Neyman, William Bryan Jennings and John Reynolds went to Dallas to do the dubbing and a voice actress from Dallas did all the women voices. The only other change I would make is that although it would have been cool to attend, I did not attend Berkeley.  Great story and well written, Richard.  Will you ever write about Manos again?
Posted by DebbiesManos at 1:01 PM 6 comments:


In response to the many requests from fans for Manos memorabilia and autographed items, I'll begin posting offers as they become available.  These will include artwork, photos and a few other ideas we're working on.


To start with, I obtained a few of these new spiffy movie posters from the Rifftrax Live Manos the Hands of Fate show on Aug 16th.  I also talked my dad, The Master into signing them and I will also sign them and personalize them for you. 16 posters in all have been signed and some already distributed. Only 5 of these are now available for sale and this is the only place they will be offered.  So...ready...set...Go. 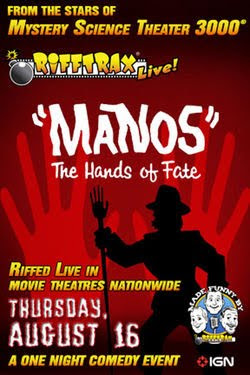 The continuing story of Hotel Torgo

The Official World Premire of Manos

Hello!  Back from Hollywood California.  Crazy, huh?  It doesn't make any more sense to me now than it did last week.  I'm invited to the Hollywood Reel Independent Film Festival in the town that is all about making movies to celebrate a West Texas film commonly referred to as "The Worst Movie ever Made".   And the reason I'm there is because people want me to tell them what it was like to be part of that film.  So...Crazy.  Huh?

On Tuesday, December 5th, the Hollywood Reel Independent Film Festival screened the official World premire of the restoration of  Manos, The Hands of Fate at the New Bev Cinema in Hollywood California.  My  appreciation goes out to the organizers and the theater for a great venue and gracious hosting.  Thanks also to Ben Solovey whose time and dedication to this restoration was evidenced so clearly on Tuesday night.  The color and sound was much better than the original and allowed us to see this classic film in all its glory.  The moths, the uneven make up, the masters jeans rolled up under his robe.  There's a lot more but you'll just have to discover that for yourselves when it becomes available.

I also enjoyed seeing familiar and friendly faces.  Several Facebook friends came and it was great to meet them face to face in real time.  Bryan Jennings who's father played the Sheriff in the original was in attendance.  He and I spent most of Tuesday watching independent films until the Manos screening and then were invited with Ben for a Q and A afterward.  We had a great time sitting in the back of the theater watching the audience watch Manos.  The audience was fabulous.  It was as though they had done Manos together before.  Choreographed beautifully with laughs, groans and a chorus of "Seriously?".  I'm telling you.  Manos has all the makings to be the next Rocky Horror Picture Show.  Just think about it and let me know whether you agree or not.

Since we were the last film of the evening, we were able to extend our Q and A.  I believe it was around 1:00 am when we were kicked out of the theater (sorry guys) with "You can keep talking, just go outside please.  We have to get up and do this again tomorrow".   Great fun.  Great to go and great to be home.
Posted by DebbiesManos at 3:27 PM No comments:

Sorry all.  I've been out of touch for too long.  Te truth is, all the public (and private) harassment from Hal Warren's son has me frustrated and I'm trying to take a higher road by holding my tongue so that's all I'll say on that...for now.  On a more positive note.  I'm currently sitting in a Los Angeles hotel room preparing to go to the Hollywood Reel Independent Film Festival this afternoon at the New Bev Cinema in Hollywood.  The organizers of the event invited me as a special guest to the screening of Ben Solovey's completed restoration of Manos The Hands of Fate.  Ben's done a remarkable job and I can't wait for people to see it looking even better than it did in 1966 at the original premire.  Not sure what the plan is tonight for me but I'll be there at the 9:30 screening.  Hoping for the opportunity to do a Q and A.  Another thing I just learned is that the New Bev Theater is owned by Quentin Tarantino.  One Manos story states that he is a big Manos fan.  Oh. how I would love the chance to ask him about that.  Keeping this short today and will report back tomorrow about the event.  If you are in the LA area and can make it tonight be sure to say hi. http://hollywoodreelindependentfilmfestival.com/
Posted by DebbiesManos at 9:54 AM 6 comments: