Manos Returns has taken a while to return, but considering we were writng a script and running a Kickstarter less than two and a half years ago and that now we have a completed project on budget?  Now that's a pretty good achievement.  I'm so proud that we delivered the online link to our Kickstarter backers before anyone else gets to see it...as promised, and  proud of my production team and our cast and crew.  Not only did we deliver as we said we would, we made a good film.  Although, we had a pretty good idea, we are happy our backers have confirmed, and now, I cannot wait to share at Crypticon Seattle this Friday night for the World Premiere of Manos Returns.


The whole project began with the idea of bringing together the remaining original actors and giving them the opportunity to do something better than the film that made them famous, and having an opportunity to connect with the long lived fan base.  The Master was on board and we were blessed to get his part filmed while he was still strong, We were so fortunate to be able to celebrate him and give him an idea of how much he is appreciated at our Manos Returns cast and crew party. 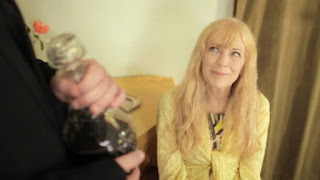 and we got Bryan Jennings, son of the original sheriff to be our sheriff. 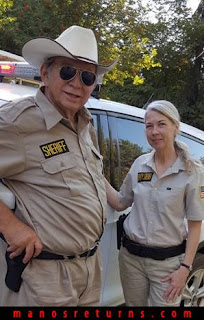 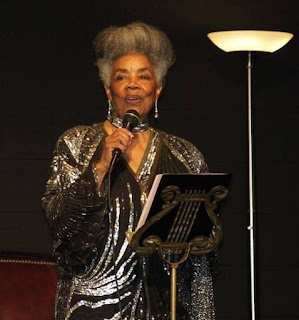 The Master in the limelight

Today, as I pack and get ready to head to Seattle, I am reminded of where this whole journey began.  On that first premiere night in  November 1966, no one could ever had imagined where things might go from there.

In the Spring of 1966 a low budget movie was filmed in the desert outside El Paso Texas with a group of community theater actors and a guy with a script and a rented camera.  In  November of the same year, the finished film premiered downtown El Paso at the beautifully classic Capri Theatre. Everyone was there.  The Mayor, the police chief and his wife, the press.  The writer, director and star of the film Hal Warren had thought of everything.  In the week before, he had displayed The Master's robe, the painting and a few other props at the local Luby's restaurant.  Chances are, the display just confused the "SundayGoingToDinner" crowd.  The night of the premiere, Hal had spotlights in front of the theatre that he had borrowed from the local car dealership. The lights scanned the sky while the autograph seekers were seeking someone important. Hal had hired the small non english speaking Native born children who usually made a living selling gum or washing windshields downtown on the Mexican border.  He supplied them with small pads of paper and stubby pencils in order to collect the prized autographs.  Hal had a red carpet from the front of the theatre to the street and rented a limo to transport the actors to the front of the theatre.  One limo... We all were instructed to wait in the alley behind the theatre while the limo came around and picked up a few at a time and dropped us off on the red carpet with the autograph seekers. I was only seven at the time, but I remember thinking "Am I the only one who realizes how ridiculous this is?"  My mom and I, and obviousy all the other women, had spent the day in the beauty parlor getting prepared for this momentous occasion so there were photos taken outside in the spotlights before everyone went in and took their seats.  We got one really nice promo shot inside the theatre before the lights went down. I love this moment frozen in time before the film began, when we all, collectively finally realized just what we had got ourselves into. 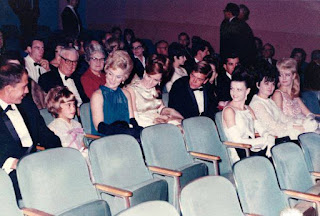 As I reflect on that time of 52 years ago, I cherish all that the original film has inspired, and the journey I have been privileged to travel.  I hope you are enjoying it too.

Posted by DebbiesManos at 5:45 PM No comments: