I make a goal of getting a blog post out on Torgo Tuesday's, but if you follow me here, you'll know that's not always the case.  Sometimes it's more like Wobbly Wednesday and even missing a week or three altogether when there's too much going on to sit down.  Time just slips away.
In this case, Tuesday turned into a really busy day and Wobbly Wednesday became catch up day.  No idea yet what to call Thursday. 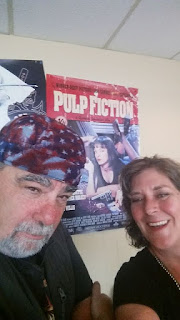 on Jackey's Hand of Horror Podcast.   We had a fun visit and catch up.  The first time we met was in April when we were both guests at Cinema Wasteland in Cleveland.  Although Duane's biggest claim to fame is as the pawn shop owner in Pulp Fiction, he is a writer, producer and acting coach as well.

I did pretty well heading back to where I'm staying with a bit over an hour drive, and was feeling a little proud of myself when a message came through my facebook chat from Willow Polson, creator of a new web series titled Manos: The Debbie Chronicles and instigator of a comic series with the same title.  She says, "Did you get the invitation?"  After a string of confused back and forth, we realized I never received the email inviting me to an event in Los Angeles (an hour and 45 away) that looked pretty cool.  Problem was, the event started in 3 hours at YouTube Space Los Angeles.  After a brief internal struggle and with the realization that Felicia Day would be moderating the event, I jumped into action. I got myself ready and back on the road headed much the way I had just come.  What a great event it was.  I met so many forward moving and successful women in writing, film, You Tube and social media.  The All Women Showrunners' Panel was so full of information and inspiration tht I am still riding that wave and ready to go ahead with some new ideas.  Click here to learn a  bit more about the event  http://www.syfy.com/syfywire/genre-tvs-female-showrunners-talk-life-after-metoo 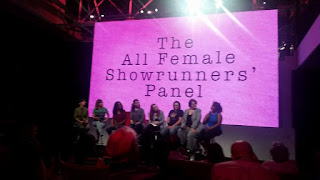 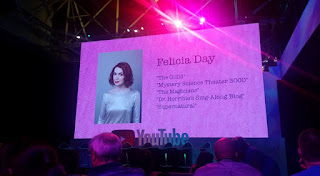 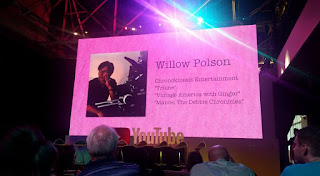 While there, I made sure to introduce myself to Felicia.  Debbie finally got to meet Kinga.  So great that I was a bit tongue tied, which is rare for me. Managed to remember to get a photo but my rushed planning ensured my phone would die at any moment for lack of a charge but managed to get a quick one snapped.  Not my most flattering but can't resisit sharing.  Heard she'll be at San Diego Comic Con next week with the Shout Factory booth so I'll see if I can get another chance. 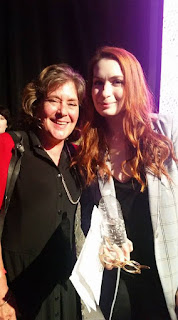 I'll be there as well to promote the web series and comic as part of the Pulsar Entertainment booth number 1235.  If you attend the con, I hope you'll find me and say hi.   I'll have my books to sign and a few photos...and always a story or two.

Posted by DebbiesManos at 1:21 PM