Debbie Does Lots of New Things

This year is busier than I've ever been doing Manos related things. Maybe that's not exactly true.  This is just a time when the accumulation of previous efforts are coming to the forefront and because of it, I'm traveling more.

So far this year, I was a celebrity guest at Cinema Wasteland in Cleveland April 6, 7 and 8th. It is a small but mighty event with fervent film fans.  They love the obscure stuff and I found many Manos fans among them.  Cinema Wasteland Blogpost

My fellow producers, Tonjia Atomic, Rachel Jackson, Joe Sherlock and I  premiered Manos Returns at Crypticon Seattle on May 4th.  I also had a table as a guest for the weekend so we had a base. We all got to hang out with much of our cast and crew for a fabulously fun filled weekend.  Crypticon Seattle Blogpost
and take a listen to my newish podcast, Jackey's Hand of Horror on Soundcloud.  https://soundcloud.com/handofhorropodcast/jhoh-episode-7-crypticon  On this most recent episode, we discuss all things Manos Returns and Crypticon.  I'm really happy with how the podcast is evolving and I especially love this episode.

This last weekend, I was a guest at Meadowlark Comic Con, the first of it's kind in Medford Oregon.  I drove to Medford and spent Friday night so as to be prepared for the May 12th Saturday event.  Meadowlark Comic Con .  It was small as was expected for the first year but the people who came really enjoyed it.  There were a lot of kids in costume to meet the pink and yellow Power Rangers.  I saw a little hulk and even a princess or two running around.  The whole event was very well organized and I felt comfortable and welcomed.
The main celebrity guest was Mindy Sterling who is a charming and very engaging person. She loved  interacting with fans posing for photos with them.  I could kick myself for not getting a photo with her. We were both busy the whole day and then I packed up to drive home right after. (The next day was Mother's Day and my kids had plans) 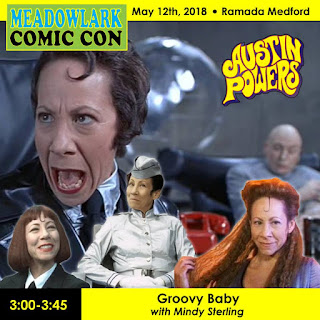 .  Although I didn't get to visit with her much, she did agree to interview with me for my Jackey's Hand of Horror Podcast on an upcoming episode.  I can't wait to chat with her and talk about her career and life.

The new Bigfoot film Primal Rage Bigfoot Reborn is now available for rent on Amazon.  I had a small part, got most of my family in as extras and got to be a location coordinator.  It's a small thing but I was honored to be invited.  If you watch it, our scenes involve the tipi.

and... here's something else in the works. A new comic book creation by Pulsar Entertainment.  I am planning to be at San Diego Comic Con as part of their booth and to promote the project.  Right now, they have launched a contest, so, if you know anyone talented in the arena of the comic book world, here's something that may be of interest.  Manos: The Debbie Chronicles Comic Book Contest .  The winner gets some cash and a pass to San Diego Comic Con.  Hope to see you there.

One other thing I am just getting organized to do, is to write a screenplay based on my book, Growing Up With Manos The Hands of Fate  How I was the child start of the worst movie ever made and lived to tell the story.  I am inspired by both I, Tonya and The Disaster Artist.  The back story of Manos is every bit as interesting, and I think, pretty damn funny.  While you're waiting for this new idea, you can order a personalized and signed copy of my book from me   paypal.me/JackeyNeymanJones/23   $23. includes shipping within the U.S.

As busy I am with all these things, I've still got to do other things as well, to make a living. As creative people know, you throw a whole lot out and hope some sticks.  I'm still teaching some painting classes and need to get back to creating new art.  It all goes in waves, but overall, I lead a pretty interesting existence and wouldn't have that part of it any other way.

Posted by DebbiesManos at 10:38 AM